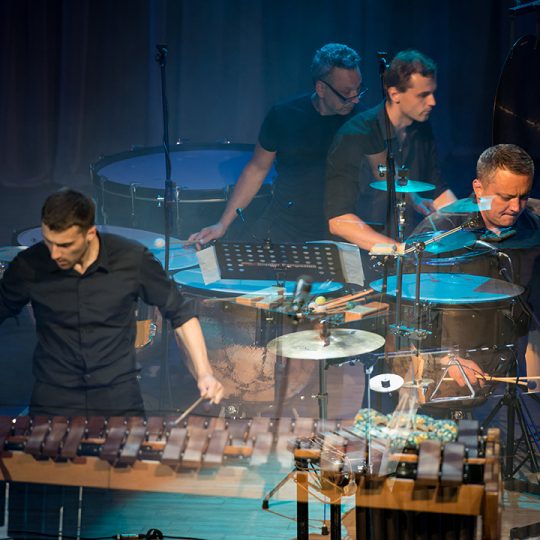 The ensemble “Gunther’s percussion” (previously known as „Viliniaus Mušamieji“) was founded in 1995, by Pavel Giunter. It was the first percussion ensemble of it’s kind in Lithuania. During the 18 years it has been active the band became popular and reached critical acclaim in Lithuania and abroad. The ensemble is often taking part in festivals in Poland, Latvia, Belarus, Russia and Denmark. Modern Lithuanian composers have written pieces specifically for “Gunther’s percussion”. The ensemble plays classical, modern, jazz and pop genres.
The founder and the leader of the ensemble – Pavel Giunter is one of the most famous Lithuanian percussionist, soloist, his stylings include, classical, modern, world and jazz music. Many Lithuanian authors have dedicated pieces just for him. P. Giunter is often participating in musical projects together with St. Christopher chamber orchestra, National Lithuania orchestra, and other chamber orchestras and solo artists.